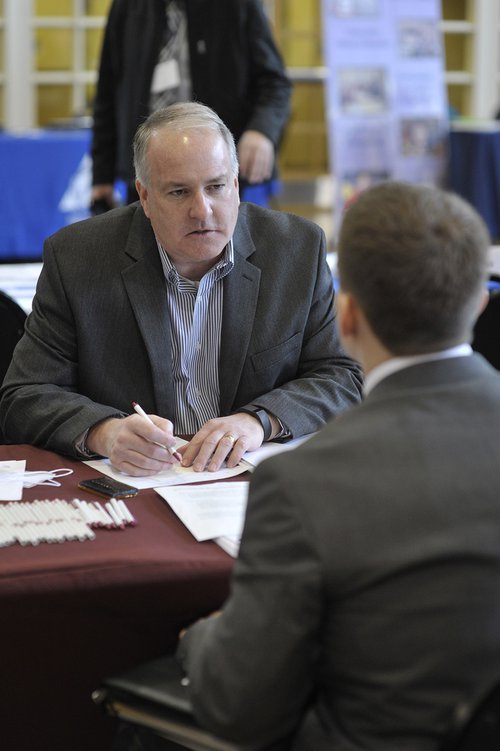 Emporia State University again has been ranked among the Top 10 Kansas higher-education institutions by a national organization.

The university scored well on criteria affecting the costs of education, and showed the value of that investment through average starting salary after graduation.

The top-10 ranking is a crucial piece of the university’s ability to recruit and retain students.

“The ‘Return on Investment’ — in other words, finding employment after graduation — has become a measure of success by which institutions are evaluated,” said June Coleman, career services director.

Thus, the department has taken on increased responsibilities and duties in assisting students as they prepare for their careers.

During fall 2015, staff met individually with 471 students, with 60 percent of the appointments focused on job or internship searches and on developing resumés, Coleman said. More than half of the 33 educational classroom presentations highlighted job searches and professionalism. The department also provides services to university alumni.

A fluctuating job market and innovative recruiting practices have contributed to major changes in the 16 years Coleman has been in the field.

“Employers have become very strategic in how they allocate resources for recruiting and hiring talent,” she said.

In addition to traditional recruiting through career fairs and on-campus interviews, employers have found social media and branding to be highly effective recruitment tools.

“For example, employers will serve on academic advisory boards, volunteer to provide practice interviews, and speak in classrooms to build their company brands on campus,” Coleman said.

In some high-demand fields like information technology, employers hire students as permanent part-time employees during their junior year. Other companies rely on internship programs to recruit talent to full-time positions later.

“It’s a way for them to ‘test drive’ students before they offer a full-time position,” she said. “... Companies that don’t actively and strategically recruit often lose out on great talent.”

Expectations of the millennial job-searchers themselves have produced major changes, too. Current students are self-sufficient and expect information to be delivered “on demand.”

In response, Career Services began offering virtual services, such as Skype practice interviews, online resumé reviews, and posting all of its resources on its website, she said.

“Although the job market is recovering, there is still a high level of competition for positions,” Coleman said. “So, Career Services staff members have become experts in data collection and reporting on our graduates ‘next step.’ The days of simply having a degree and a good resumé are gone.”

Other rankings published in the SmartAsset survey showed Emporia State had the lowest tuition rate and the lowest student-living costs among the public and private institutions surveyed.

Among Regents institutions, Emporia State placed third in average scholarships and grants available at $5,084, behind the University of Kansas at $6,394 and Washburn University at $5,317.