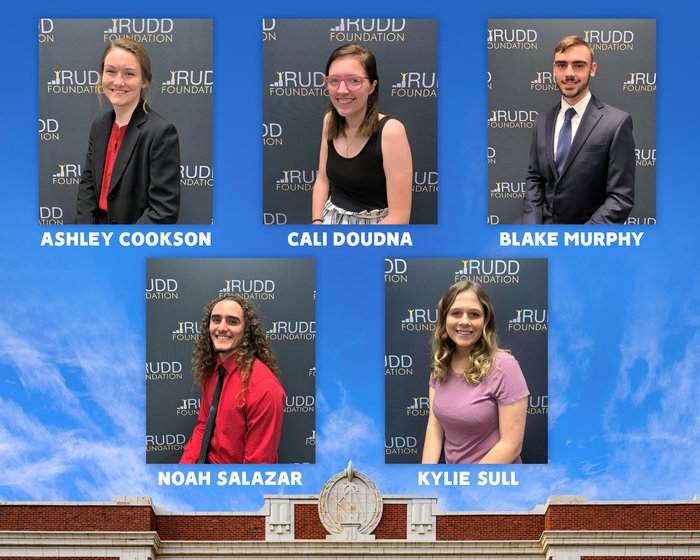 In a year noted for unpredictability and changed plans, five first-time students at Emporia State are able to pursue their college dreams with one certainty — their education is paid for thanks to scholarships from the Rudd Foundation of Wichita.

The Rudd Scholarship is a competitive, four-year award designed to pay any remaining costs associated with tuition and fees, books and supplies, and room and board after accounting for all other grants, scholarships and financial awards. It can be applied only toward studies at Emporia State University, Fort Hays State University or Wichita State University for full-time students in pursuit of an undergraduate degree.

The 2020 Rudd Scholars at Emporia State are:

These five students are the third class of Rudd Scholars at ESU. In each of the first two years, Rudd awarded a total of 25 scholarships. For 2020, the foundation considered the applicant pool highly competitive and awarded 30 scholarships.

“We couldn’t be more pleased with the exceptionally high-caliber, well-rounded students that were chosen for this year’s Rudd Scholarship,” said Peter Najera, former president of the Rudd Foundation at the time the scholarships were awarded. “By removing the financial burden of a college education, we expect these go-getters to be actively involved on campus, maintain good grades, and graduate in four years debt free.”

According to Dr. Shelly Gehrke, assistant provost for enrollment management and academic success, Rudd Scholars do, indeed, rise to these expectations. They traditionally are recognized as First-Year Scholars and their names routinely appear on honor rolls.

“Two Rudd Scholars placed at both state and national Phi Beta Lambda competitions this past year,” Gehrke added, “despite the changes to a virtual competition brought by COVID-19.”

Both Emporia State and the Rudd Foundation plan events for the scholars that keep them engaged, which is a key indicator of success in college.

The Rudd Foundation will open applications for 2021 scholarships on Oct. 12. Information is online at ruddfoundation.org.