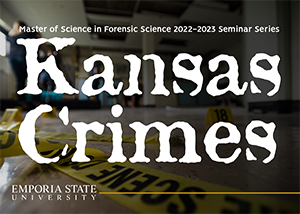 Two murder cases with ties to Emporia are the focus of the first two sessions of the fourth annual Master of Science in Forensic Science Seminar Series at Emporia State University. The five seminars throughout the 2022-23 academic year focus on “Kansas Crimes.”

The first session, “The Sinister Minister: The Murders of Sandra Bird and Martin Anderson, Part 1,” will be Oct. 10. Guest speaker is Bobbi Mlynar, former reporter and city editor for The Emporia Gazette, who covered the investigations into the deaths of Bird and Anderson.

The evening begins with an open house of the forensic science program in Science Hall 147 from 5 to 6:30 p.m with facility tours and a meet and greet. Mlynar’s presentation begins at 7 p.m. in Science Hall 72.

Dr. Melissa Bailey, director of the MSFS program at Emporia State, decided a theme of “Kansas Crimes” was appropriate for several reasons. First, she met Mlynar through a mutual friend and learned of her involvement with the cases.

“I knew about the murders mainly through the TV movie ‘Murder Ordained,’” Bailey recalled. “I was so excited to meet her in person.”

Professional contacts through the forensic science community led to the remaining topics, all of which pertain to Kansas cases.

The seminar series originally began as classroom presentations from experts to students in ESU’s master of science in forensic science program, Bailey said. Then she realized community members both on-campus and off might be interested, and the five-session series of public presentations was born.

“I’ve been thrilled that attendance is about half ESU campus community and half Emporia community,” Bailey said. “The feedback has always been great, and I get asked when our next series is and what’s coming up from community members every year.”

After the first session on Oct. 10, the remaining seminars are:

All seminars are free and open to the public. Parental discretion is advised. Some content may not be suitable for younger children.