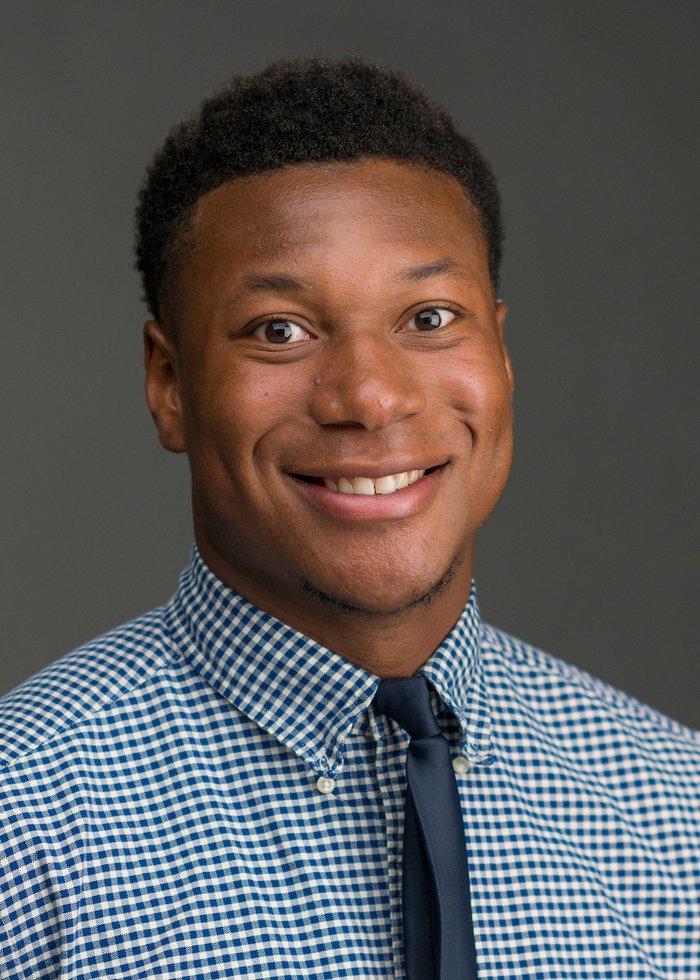 In May 2019, first-generation student Malcolm Dade walked across the stage at White Auditorium and followed in the steps of his older sisters to become one of the first members of his family to receive a college degree.

Graduating with an Accounting degree, the Edmond, Oklahoma, native always knew college was the best route for him because of the way his parents preached about education. He is currently on track to graduate in August 2020 with his Master of Business Administration with an Accounting concentration.

“I honestly would not be where I am today without my parents. I wanted to make my mom proud, and I feel like I did that” Dade said.

After looking around at a few different schools, Malcolm eventually chose Emporia State because of the opportunity to be on the track and field team. After coming to campus undecided on what major to pursue, he began to think about what he wanted to do and decided to enroll in some accounting classes.

“I knew ESU had a great School of Business, and I have always wanted to run my own business someday. There are so many things you can do with an accounting degree, and I feel like accounting is one of the most important parts of running a business, so I gave it a shot!” he recalled.

At first, it wasn’t what he thought it would be.

“College was a huge adjustment for me. I actually wanted to leave after my freshman year. But once I really got into some more of my classes, I developed a passion for accounting, and Emporia really became home.”

Along with balancing a full-time course load with being a student-athlete, Malcolm took part in many other organizations on campus. As a first-generation student, he was elected as the vice president of the first-generation student organization. In this role, he helps coordinate events, runs the social media page and spreads awareness about the significance of “being first.”

Additionally, during his undergraduate years, he held a position as senator for the Associated Student Government. Also, as the Fiscal Affairs Committee chair for ASG, he played a key part in helping to allocate funding around campus. Dade is also a member of Kappa Alpha Psi Fraternity on campus. Currently, during his graduate program, he is working in the Office of the President as a graduate assistant.

Toward the end of his senior year at ESU, Dade, like many business students, was looking for an internship that would help enhance his skills and professional experience. After looking at the list of companies that would be coming to the career fair at ESU, one company specifically caught his eye — Ernst and Young.

“I actually wasn’t even going to go to the career fair,” Dade said. “But when I saw EY was going to have a booth there, I knew it would be a great opportunity to at least put myself out there if nothing else.”

After dressing up and polishing up his resume, he went to the career fair and struck up a conversation with the recruiter at the Ernst and Young table.

“We just had an easy conversation and established a professional relationship very quickly,” he said about his experience. “Later on, I was asked to do a video interview with some standard situational questions, then was given the opportunity to meet and interview with one of the partners and managers at the EY firm in Wichita.”

Of course, interviewing with one of the “Big Four” accounting firms in the country is no easy task.

“Because EY is so well-respected and such a big firm, internships there can be very competitive. Dr. (John) Rich’s professional development class really helped me be prepared for the interview and know what to expect,” Dade said.

After the long, competitive interview process, Dade received an offer to join the EY team as a summer assurance intern at the Wichita office. In his position there, he wasn’t making coffee runs, filing papers all day or spending hours at the copy machine; he was doing real work.

“My main duties for the summer included conducting audits for Restaurant Management Co., a company that owns many chains such as Pizza Huts. I was in charge of doing 401k audits for their people and basically making sure every participant that was eligible was able to get what they needed. It was a very high-impact, real-life experience,” he said.

Aside from the technical knowledge learned on the accounting side, Dade says some of the most valuable lessons he learned came from just not being afraid to ask questions.

“Asking questions is the most beneficial thing you can do when you are still learning. With the engagement I was on, I worked with managers and partners every day and learned to ask questions at any time. Everyone was experienced and knew I was an intern, so they were always willing to help.”

Dade compares an internship to a daily interview when he talks about the importance of internships in the job search process.

“Internships can be very valuable, real-life work experiences. They are an everyday interview because you are getting evaluated as an employee, and you are evaluating the company to see if you are a good fit. You also get more of a feel for what you will be doing on a daily basis after college. Besides the learning aspect, internships are also great for networking. Sometimes it isn’t about what you know, but who you know. My advice is don’t knock down any companies. Give them all a chance and don’t be afraid to put yourself out there.”

In 15 short months since walking across the stage at White Auditorium, Malcolm will walk across it again, this time to receive his graduate diploma. Shortly afterward, he will begin working at Ernst and Young and will join their assurance staff in Dallas, Texas, a position he credits to his experience here at ESU and his internship.

One of the most influential things in Dade’s mind was being able to take advantage of getting to know his professors and peers on a personal level because of the small class sizes within his major.

“Having that close-knit environment helps you feel more comfortable asking your professors questions, and being able to have personal relationships with your professors goes a long way. They know you by name, know what you want to do, and will always be in your corner. I wouldn’t be where I am today without everyone at ESU.”