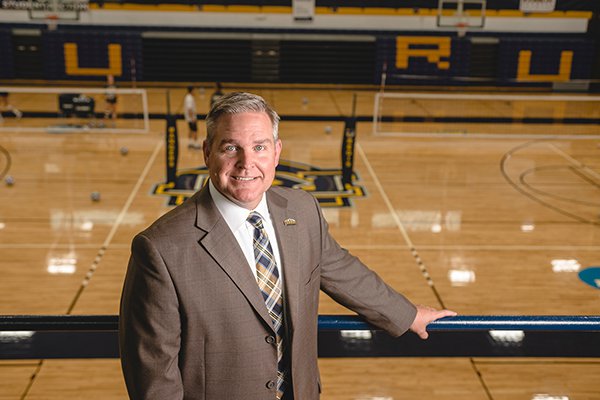 David Spafford, an experienced professional with a proven track record for fundraising, has been named the new Director of Athletics for Emporia State University. Spafford, a Kansas native, brings a successful 27-year career in athletics to Hornet Nation. Spafford will officially begin his duties on July 17, 2022.

"Emporia State Athletics is an opportunity that I have been looking at since my days coaching at Manhattan High School, while on the Kansas Shrine Bowl Board of Directors and while working for Kansas State and Wichita State Athletics," said Spafford. "The overall community has been very supportive throughout the years and with a new era of leadership beginning under President Hush, it is truly an exciting time for Hornet Nation.”

The Belleville, Kansas, native brings a blend of experience spanning 22 years in NCAA Division I and Division II athletics with an additional five years in University Advancement at seven major universities. He has assisted or led more than 10 major capital improvement projects totaling $253.6 million and has experience in two major university’s $1 billion campaigns. Spafford is committed to educational excellence, competitive success and integrity while leading the coaches, staff and student-athletes to achieve the same goals.

"We are thrilled for David to join our team. His Kansas roots, past successes in development and fundraising along with his structured and disciplined approach are exactly what Hornet Athletics needs right now,” said Emporia State University President Ken Hush. “His commitment to student-athletes and the experience he brings from other Kansas schools are vital to ESU’s return to national prominence."

Over the past six and a half years, nearly $6.5 million in private funding and facility use agreements for facility enhancements were generated. The enhancements included the renovation of the Regis Fieldhouse with all 12 team locker rooms renovated, administrative offices relocated and renovated, a new ticket office, new video scoreboards, a new sound system, renovated strength and conditioning/rehab room and a new indoor hitting facility for baseball and softball. He raised $3.15 million for the construction of the Berce Athletic Center — a 19,500-square-feet multi-functional practice facility featuring two full basketball courts and volleyball courts, along with auxiliary centers for athletics training, strength and conditioning — along with $2.7 million for artificial turf fields and lights.

Under his leadership, all 12 Rangers sports have participated in Rocky Mountain Athletic Conference postseason play. The lacrosse team advanced to the NCAA Division II national semifinals in both 2018 and 2019 while the Ranger volleyball team made the national semifinals in 2019 after reaching the Elite Eight in 2018. Five different programs have advanced to NCAA Tournament play in his tenure.

Academically, the Rangers have increased their cumulative grade point average from 3.318 to 3.527 in the fall of 2022. Regis Athletics has earned six consecutive NCAA Presidents' Excellence Award for Academic Excellence. RU student-athletes continue to lead by participating in over 3,000 service hours annually engaging the community locally, regionally and nationally.

Spafford has held several leadership roles in the athletic community including time on the NCAA Division II Men’s Basketball and Women’s Lacrosse Regional Advisory Committee, the RMAC’s Athletic Director's Administrative Committee and the RMAC Diversity and Inclusion Committee. He established the first ever Title IX review of the Regis athletic department and developed a Diversity and Inclusion Committee for the department made up of administrators, coaches and student-athletes.

Spafford first joined Regis as the Assistant Vice President of University Advancement in July 2015. His duties comprised of identifying, cultivating and soliciting new and ongoing relationships with major gift and principal gift prospects for Intercollegiate Athletics, the College of Business and Economics, Regis College and the College of Contemporary and Liberal Studies. He also led the major gift fundraising staff who focused on these departments and colleges to support the goals and objectives of the Regis Rising Strategic Plan.

"I feel very fortunate to have been selected the Assistant Vice President Director of Athletics at Regis University six and a half years ago. It has been very rewarding yet challenging experience that has provided many experiences professionally and personally," said Spafford. "We have been able to enhance our student-athletes’ overall experiences with new facilities and overall support to our programs while giving the opportunity to walk across the stage to receive their diploma, with many of them wearing a championship ring with a new opportunity in front of them."

From 2010-11, Spafford was the Assistant Athletic Director for Major Gifts at the University of New Mexico and assisted with the renovation of The Pit while assisting in securing lead gifts for the renovation of the baseball program’s Lobo Field. Previously, Spafford was the Assistant Athletic Director for Development and Indian Club Director for Arkansas State University in 2007 before returning to Belleville, Kansas, to assist his parents in managing, and now owning, Anchor S Farms.

As the Associate Athletic Director of Development at Wichita State University in 2000-04, he coordinated, planned and implemented all fundraising activities for the school’s athletics programs. Spafford’s fundraising efforts led directly to the Roundhouse Renaissance Campaign that directed the expansion and renovation of the basketball arena and surrounding athletic complex. The $25 million construction was funded by private contributions and student fees. Other improvements included the WSU Baseball’s Eck Stadium, the track and field facility at Cessna Stadium and softball field. While at WSU, the baseball team won two conference championships, and appeared in two NCAA Regional Tournaments. The women’s basketball team had its first-ever 20-win season and participated in the Women’s National Invitation Tournament. Concurrently, the men’s golf team and women’s and men’s track and field teams all secured multiple conference championships.

Prior to his time at Wichita State, from 1994-2000, Spafford served in multiple management positions at Kansas State University. As the Assistant Athletic Director for Development at K-State, Spafford connected with friends and alumni of the University, fundraising more than $2.4 million during the 1998-99 fiscal year. The money raised was used for many improvements for the athletic department including, but not limited to, the women’s volleyball office, Bill Snyder Family Stadium, academic learning center, women’s basketball office and men’s basketball program. The athletics program and teams saw tremendous growth. The football team participated in the Aloha Bowl, Plymouth Holiday Bowl, Cotton Bowl, Fiesta Bowl, Alamo Bowl and Culligan Holiday Bowl during his tenure at Kansas State.

Spafford began his intercollegiate athletic career in 1991 working for the University of Missouri – Kansas City Athletic Foundation as a consultant and sales representative.

Spafford began his career in athletics as an assistant football coach for seven years, including the Manhattan High School 1988 undefeated state championship team that earned a USA Today final ranking of 23rd in the nation.

A 1990 graduate of Kansas State University who played football for the Wildcats in 1986, Spafford and his wife, Bryanna, have six children: Christopher and granddaughters Aubrey and Addison, Danielle and husband, Travis, Patrick, Alex, Camryn and Jaclyn.

“Thank you to President Hush, the committee, especially co-chairs Erin Mykelby, Gary Scherrer and consultant Ross Bjork, and all of the staff for their support to lead Emporia State Athletics,” said Spafford. “My family and I are very excited to join Hornet Nation! Stingers Up!”