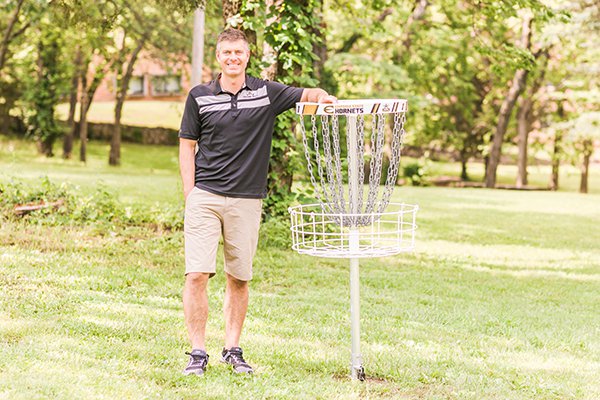 Dynamic Discs donated the project, including all baskets, basket wraps, tee pads, and design and building of the course's kiosk. The 9-hole, par-3 course is in Wilson Park on the east side of campus.

The creation story of Dynamic Discs is well-known in both disc golf circles and Hornet Nation. Rusco was an undergraduate in ESU’s School of Business in 2005 when he began Dynamic Discs eBay company in his basement. After two more basements and one attic location, Dynamic Discs opened a storefront in downtown Emporia in 2011.

The company has expanded into a manufacturing partnership for branded discs. Its next expansion is Dynamic Distribution, which combines all its warehouse operations in southwest Emporia.

During the past 15-plus years, Rusco and Dynamic Discs have been instrumental in bringing Professional Disc Golf Association tournaments to Emporia.

“My time at Emporia State certainly did change my life,” Rusco explained. “I found my passion for entrepreneurship and paired it with the sport I enjoyed as a way to create and sustain relationships with my football and track teammates and my roommates.

“I’m excited to see the connection between disc golf, ESU and Dynamic Discs strengthen,” Rusco added. “It will pay dividends to all over time.”

Jacob Pittenger, a senior busines data analytics major from Olathe, began playing disc golf when he came to ESU. He was the first to suggest the name Hornet Hills to honor the relationship between the sport and Emporia State and Rusco developed.

“One thing I thought was cool about naming the disc golf course Hornet Hills is that it is very specific to the location and something to do with Emporia State,” Pettenger explained.

The other people suggesting Hornet Hills as the name were Annalise Fischer, an elementary education major from Wichita, and Ana Bailon, a 2019 ESU graduate who works for Emporia Public Schools.

Hornet Hills is available for play now. A ribbon-cutting and grand opening ceremony is being planned for the fall. It will involve the Emporia State University Disc Golf Club, which is both a recognized student organization and a recognized club sport.