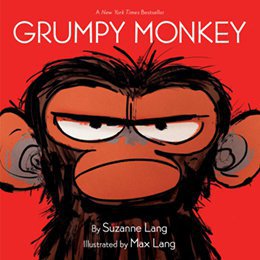 As children transition from schooling at home to summering at home during the worldwide COVID-19 pandemic, some grumpy days — from children and adults — are to be expected, even when the sun is out and the weather nice.

“Though the voting (by the award committee) was in the month of February, the selection of this book is timely for the current shelter in place environment,” said Dr. Roger Caswell, chair of the Bill Martin, Jr. Picture Book Award Committee, “The protagonist, and others around him, learn that a range of emotions is normal.”

The Bill Martin, Jr. Picture Book Award aims to promote an appreciation of quality literature in young children across Kansas.

Suzanne Lang, the author of “Grumpy Monkey,” works in children's books and television. She is a producer for Nickelodeon International's animated shorts program and previously worked for Cartoon Network. Her books are often illustrated by her husband, Max Lang. He is an animation director, storyboard artist, character designer, and illustrator who codirected the film adaptation of The Gruffalo, which was nominated for an Oscar and a BAFTA.

Suzanne Lang will speak and sign books at Emporia State University as part of the Kansas Regional Reading Recovery® and Early Literacy Conference on Nov. 2, 2020.

Nominees for the 2021 award, along with previous years’ winners and nominated works can be found at https://bit.ly/2020BMJwinner.

Each year, books are suggested by teachers, parents, communities, and librarians. A committee chooses nominations from the list of suggested books. The annual nominations are announced in the spring and, during the following winter, the committee votes on the book. This provides time for children and adult interaction before voting for a winner.

The Bill Martin, Jr. Picture Book Award was established in 1996 by the Kansas Reading Association. Since March 2018, the award became a statewide award presented by Emporia State University. The purpose of the award is to promote an appreciation of quality literature in young children across Kansas. The award is named for Kansas native Bill Martin, Jr., American educator and author of more than 300 children's books.

Martin graduated with a teaching certificate from Emporia State University. He worked as a teacher and principal before starting his career as a children’s book author. Through the years he gave children some of their favorite books, including “Brown Bear, Brown Bear,” “What Do you See?” (illustrated by Eric Carle), “The Ghost-Eye Tree,” “Barn Dance,” “Chicka, Chicka, Boom, Boom” and many more.