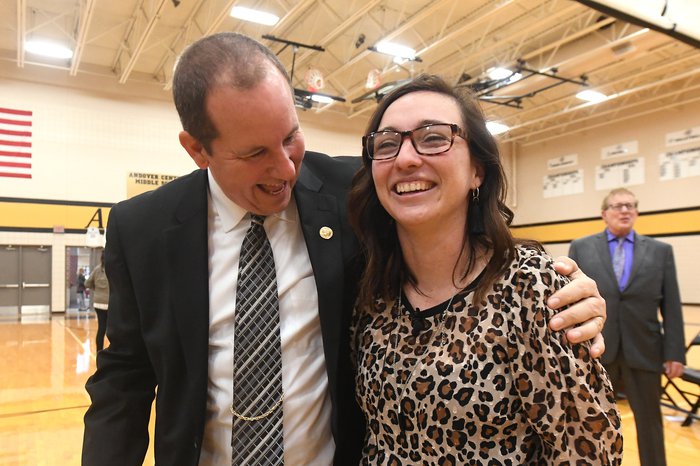 Carly Bowden, an Emporia State alumna who was inspired in high school to become a math teacher, won a $25,000 Milken Educator Award on January 9. Bowden (BSE 2015) teaches at Andover Central Middle School. She is shown above with Brad Nicks (BSE 2009), who was Bowden’s high school math teacher when he received a Milken Award.

Research led by Assistant Professor Darren Rebar (Biological Sciences) was written about in an article for the Daily Mail in the United Kingdom. The research studied family interactions in common sexton beetles, concluding that “sibling rivalry is not just commonplace in human families, but in beetles, too.”

Students Corey Mann and Ethan Bush (finalists) and Kara Mason (first alternate to the finals) were selected to compete in the Barbara Rondelli Kansas Statewide Classical Voice Competition with prizes up to $1,500. The final live competition will be held March 7 at Pittsburgh State University.

The 18th Annual Kansas-IDeA Network of Biomedical Research Excellence (K-INBRE) Symposium was held January 17 through 19 in Wichita. Ten faculty attended along with 18 students who presented 11 posters.

Congratulations to theatre alumna Jayne Houdyshell, who plays Hannah in the movie “Little Women,” which is currently in theaters.

Twenty-two Professional MBA students and two faculty members from Dhaka University in Bangladesh were hosted by the School of Business in January. They were enrolled in the Management Essentials for Executives training program taught by faculty across campus. While they were here, they toured several businesses in Emporia, Wichita,and Kansas City, including the Federal Reserve.

Emporia Entrepreneur Challenge is right around the corner. Come to the “Meet & Greet” January 28 from 6-8 pm at the Sauder Alumni Center. This is your opportunity to meet those with the skills you do not possess and form your team.

Congratulations to Dr. Jessica Dain (BSE 1995 English and Physical Education; MS 1998 Educational Administration), who was named superintendent of the Piper, Kansas, school district for the 2020-21 school year. She currently is assistant superintendent of support services and middle school education for the Olathe School District.

Graduation for the Denver cohort was on January 12. Congratulations to the latest SLIM graduates!

SLIM alumna Terrilyn Chun (OR MLS 2009) is the deputy director of Multnomah County Library in Oregon, and served as an advisor to the National Impact of Library Public Programs Assessment with the American Library Association’s Public Programs Office.

Thirteen Emporia State students attended the five-day leadership retreat “Leaders for the Common Good,” facilitated by the Center for Student Involvement. This retreat challenged participants to learn and apply adaptive leadership techniques to their lives.

Emporia State combined for seven event championships as the Hornet men and women track and field athletes swept the team titles at the Wichita State Shocker Prelude in Wichita on January 17. The Emporia State women had five of the championships while the men won two events.

Social Sciences faculty, Dr. John Barnett’s, article, “Aquaculture Policies in the Thanh Hoa Province in Vietnam,” co-authored with Khanh Nguyen, appeared in the July 2019 issue of the Journal of Asian Politics and Society.

A paper by Kennedy Mwangi (business graduate student), Dr. Jun Yu, and Dr. Joyce Zhou was recently published in the Journal of Marketing Development and Competitiveness.

SLIM alumnus Terrilyn Chun (OR MLS 2009) wrote “Get With the Programming” for American Libraries Magazine.