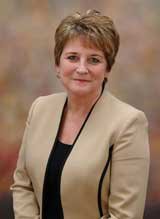 Alumni of The Teachers College at Emporia State have recently been named Superintendent of the Year, Kansas Teacher of the Year and School Counselor of the Year.

“The legacy of Emporia State University is educator preparation,” said Dr. Ken Weaver, dean of The Teachers College at Emporia State. “Students and faculty throughout the university commit themselves daily to ensure Kansas children are receiving the very best classroom learning opportunities with the appropriate supports at the building and district levels. This year, that sustained excellence is reflected by three alumni selected by their peers as the best teacher, counselor and superintendent in Kansas.

“The Teachers College extends its congratulations and its appreciation to all teachers, counselors and superintendents for their efforts to make Kansas public education among the best in the nation.”

Givens was named the 2017 Kansas Superintendent of the Year in early November. She earned her bachelor’s degree in education from Emporia State in 1977 and has been with El Dorado Public Schools since 2007.

Formerly an assistant superintendent in Pratt, Givens has also served as a middle and elementary school principal; as a computer consulting teacher; and as an elementary and middle school math, language arts and computer teacher in various locations.

Sickel was named the 2017 Kansas Teacher of the Year in mid-November. Sickel earned his bachelor’s in music education from Emporia State in 2004.

He has been teaching for 13 years, beginning as a vocal music teacher in Osawatomie USD 367. He has also taught at Louisburg USD 416 and Olathe USD 233. Currently he is a vocal music instructor at Blue Valley North High School, where he has been for the past four years. He currently is attending the University of Missouri Kansas City Conservatory of Music and Dance to obtain his master’s degree in music education.

The Kansas School Counselor Association named Dixon its 2016-17 Outstanding School Counselor of the Year in late November. Dixon graduated from Emporia State in 2000 with a master’s in counselor education with a concentration in school counseling.

She has been a school counselor for 15 years. She currently is a counselor for Blue Valley Southwest High School in Overland Park.

The KSCA award recognizes an outstanding individual’s performance in a number of areas, including leadership and advocacy skills, and innovations in school counseling programs. As part of the award, Dixon will represent the state in the American School Counselor Association’s School Counselor of the Year contest.