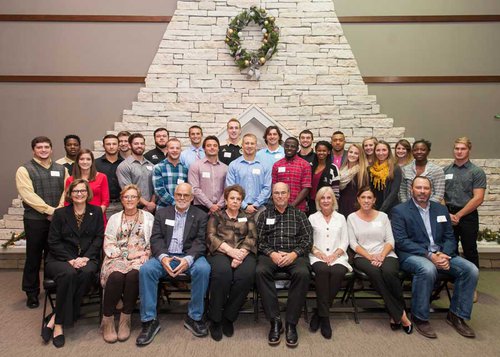 A key aspect of Weiser’s selection process for each Earl W. Sauder Athletic Scholar is a question he asks himself about the late Earl W. Sauder.

“I had the honor of knowing Earl Sauder for many years,” said Weiser. “Something I always ask myself during the selection process is ‘Would I be able to introduce this young person to Earl Sauder, and would he be proud of them?’”

Earl Sauder established the Earl W. Sauder Athletic Scholarship in 2004 with a substantial gift in excess of $1 million. Even after his passing in 2006, the Sauder family has continued to build on his legacy by enhancing the scholarship with gifts of their own.

In 2013, Earl Sauder’s son Steve Sauder and his wife, Bobbi Sauder, gave a significant gift to the Now & Forever Campaign that doubled the annual output of the Earl W. Sauder Athletic Scholarship.

“I know that Earl would be very proud that these student-athletes are Hornets as well as their success in their lives — their academic lives and athletics,” said Weiser. “Without the endowed gift by Earl Sauder and the follow-up gift by Steve Sauder and the Sauder family, I can’t tell you the impact that it makes on the athletics department on our ability to recruit and to have teams that we’re proud of.”

“As an Earl Sauder Scholarship recipient, I am thankful that I get the opportunity to fulfill my dreams of being a college athlete and a future nurse,” said Vanvleck, a native of Kansas City, Missouri. “Because of this scholarship, the four short years I have to represent Emporia State include not only getting to continue playing the game that I love, but also continue my education.

“I love that Emporia State sets me up to succeed and lets me pursue my dreams of being a college athlete as well as obtaining such an intense degree in the nursing field,” Vanvleck added.

“When I graduate next semester, I’ll be a first-generation college student and the first person with a last name of Moten to graduate from college,” said Moten, who is from Gary, Indiana. “I’m grateful that I have the opportunity to be a role model for students not only in the community where I’m from, but the Emporia community as well. It means a lot to have a great community behind me and to have all of the support that I have.”

Steve Sauder is the president of Emporia’s Radio Stations, Inc., (KVOE AM & FM and KFFX-FM) and also a founder and chairman of the Board of Managers of ValuNet, Emporia’s fiber-optic broadband network that makes it one of only two gigabyte communities in Kansas.

“I went with my son Jamie and the Central Missouri Mules to watch them play in the national baseball tournament one year,” said Steve Sauder. “While I was there, I spent time with their coaches and saw firsthand what a significant gift could do for their baseball program.

“I came home and one day, my dad and I were talking and I told him that if he gave a substantial gift to Emporia State Athletics, it would be transformative. When he established the scholarship program, he made sure that all 15 sports were taken care of. There’s some irony that my father was never an athlete, but became the benefactor for this scholarship, which is important to what goes on here. We’re really proud of it.”

Below is a list of the 2016-17 Sauder scholarship recipients, their sports and majors:

Now and Forever: The Campaign for Emporia State University, set out with a working goal to raise $45 million through the most comprehensive campaign in university history. We have now reached $50 million and are still climbing.

For information about how you can be a part of Now & Forever, the Campaign for Emporia State University, before the campaign closes on Dec. 31, 2016, please contact campaign manager Carol Cooper at 620-341-6463.