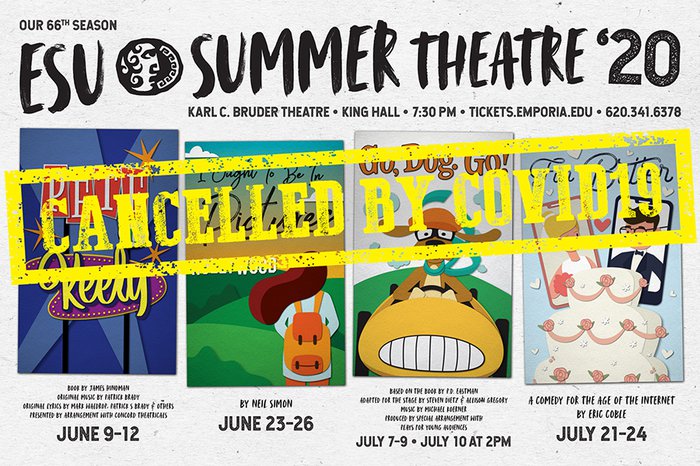 Emporia State University Theatre has postponed its spring 2020 production of Euripides classic Greek tragedy “Medea.” Originally to be presented as the final show of the 2019-2020 season, the production will now be presented in the fall of 2020.

Under the direction of faculty director Dennis Turney, “Medea” features the designs of Nancy Pontius (set) and Susie Williams (costume). Most of the original cast members will return for the production tentatively scheduled for the weekend following Thanksgiving.

Since the university has announced that the first session of summer school will be presented remotely, the 2020 Summer Theatre season has been canceled. It will mark the first time in 65 consecutive years that ESU will not present live summer theatre onstage since the program was originated by Karl Bruder in 1955.

The season was scheduled to begin on June 10 with a special alumni production opening the 66th season. It was also to be the final production led by Director Jim Bartruff and Choreographer Lindy Bartruff. They will retire at the end of the current season, after 16 years at Emporia State University,

Plans are currently underway to present an online production to commemorate the Bartruffs’ final season. Such a show would also maintain the consecutive summer theatre streak into its 66th season. If the June production goes well, it is hoped that a similar production might be presented in July.