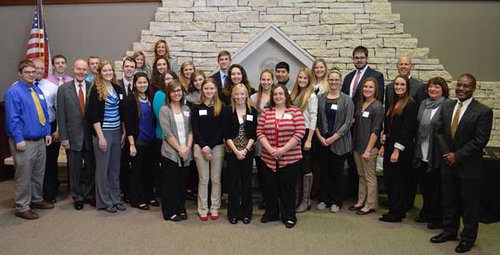 Each scholarship is renewable annually, meaning a student who earns the scholarship as a freshman remains eligible through graduate school as long as he or she maintains the required minimum 3.25 GPA.

Emporia State was the first of seven Kansas higher education institutions to partner with Capitol Federal Foundation in a scholarship program preparing business students for the challenges of the future. Foundation Chairman Jack Dicus, Foundation President Tammy Dishman and members of the Foundation Trustees traveled to Emporia for this annual celebration.

“We love getting to know the students and hearing how the scholarships impact them,” explained John Dicus, Foundation trustee and chairman, president, & CEO of Capital Federal Savings Bank.