"Lake Wooster began as a picturesque ravine. Dr. Wooster used to admire this ravine and dream of it as a place where he could carry on water research. He and his students used to bring in stones and plants from field trips and arrange them along the stream. Eventually a dirt dam was constructed and a lake appeared." - From The Bulletin , January 20, 1962

Born in Hammond, New York, on August 1, 1849, Lyman Wooster came to Kansas with his wife in 1883 to become superintendent of schools in Eureka. Trained in geology, one of Wooster's projects during the 14 years he spent in Eureka was supervising the Kansas educational exhibit for the World's Fair in Chicago in 1893. In 1897, Wooster became professor of biology (and, later, geology) at KSN. He died in Emporia in 1947 at the age of 97. 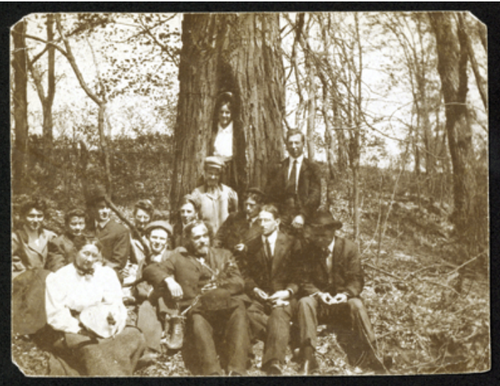 [Image: Professor Lyman Wooster (front row, with hat on his knees) and one of his geology classes, circa 1900.]