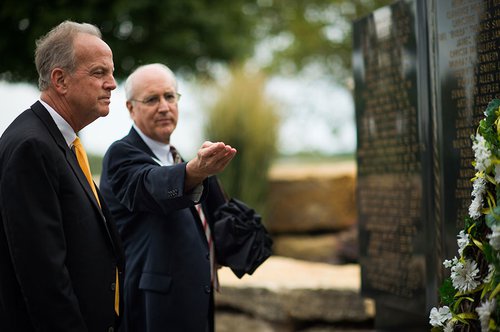 Dr. Ken Weaver, dean of The Teachers College at Emporia State, right, shows Sen. Jerry Moran, R-Kansas, the Memorial to Fallen Educators during a 2015 visit by the senator to the Emporia campus.

Emporia State officials are pleased that the Memorial to Fallen Educators is a step closer to national status.

Sen. Jerry Moran (R-Kansas) announced this morning that S. 167 — legislation to designate the Memorial to Fallen Educators as a national memorial — passed the U.S. Senate. Moran introduced the legislation in January of this year.

“We appreciate Senator Moran’s support in sponsoring this legislation,” said ESU President Allison D. Garrett. “We are delighted the Senate has taken action to honor educators who have lost their lives while working with students.”

The Memorial for Fallen Educators was created by the National Teachers Hall of Fame and dedicated in June 2014. Originally created to honor fallen educators in preK-12 schools in the United States, the NTHF board in 2015 voted to expand to include those in higher education.

U.S. Rep. Roger Marshall (R-Kansas) introduced a similar bill in the House on May 25.

For more about the legislation passed in the U.S. Senate, go to Moran’s website: http://bit.ly/2BRry3c.

For information on Rep. Marshall’s bill, go to https://www.govtrack.us/congress/bills/115/hr2711.

For more about the Memorial to Fallen Educators, go to https://nthfmemorial.org/.