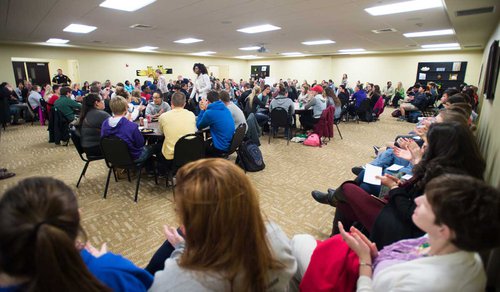 Nearly 200 students turned out for a forum on equity and inclusion Thursday at Emporia State University and engaged in a conversation with topics ranging from embracing diversity to stereotypes to sexual assault and victim shaming to word choices and questions to bullying.

Changing the definition of “diversity” is a key, said one student. “Diversity,” he said emphasizes the ways people are different. But, if we can find commonalities, we develop friendships, which makes it easier to discuss differences.

Nearly 20 people stood up and shared their thoughts and experiences to the packed Preston Family Room during the 90-minute forum sponsored by Associated Student Government. Notecards were available throughout the room if people were uncomfortable speaking out and wanted to write their thoughts down for someone else to read. Despite the crowd, no one took advantage of that, and nearly all the speakers introduced themselves.

“It just always surprises me what people go through and you would never know unless they tell you,” said Emmanuel Cockrell, president of Black Student Union who along with ASG President Janet Weaver led the forum. “Some are able to hold their head high every day and we don't know that they once carried their head in shame.” 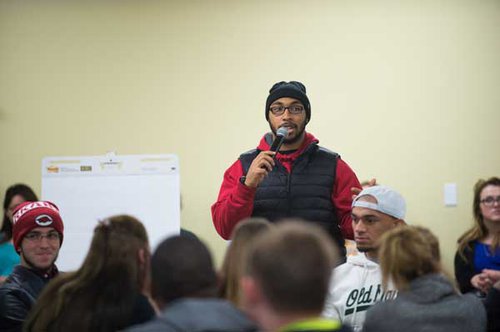 Some made it clear they hadn’t intended to speak out, but they were moved by what others said to share their thoughts. For many, it was a way to educate others about their viewpoints. One black student shared that he used to tell black jokes before others could, noting it was a coping mechanism developed in childhood to counteract playground bullying.

He has since worked to stop telling the jokes because he has realized that it just ostracizes him and reinforces differences rather than what he has in common with other students.

Other students made the point that equity and inclusion issues often are unseen because they do not all deal with the color of a person’s skin or their nationality.

“You don’t know people’s backgrounds,” said one student. “Everyone is different, but everyone has a story.

“Everyone is a puzzle piece,” she continued. “When you put the puzzle together you make a beautiful picture.”

Interim President Jackie Vietti and other faculty and staff were impressed with the students and their stories.

“Our students spoke from their hearts,” Vietti said. “Some shared truly painful situations they had been in, and others immediately spoke of their support.

“Their desire to break down barriers and build bridges shows great promise for the future of Hornet Nation and their own communities as they leave us and become leaders elsewhere.”