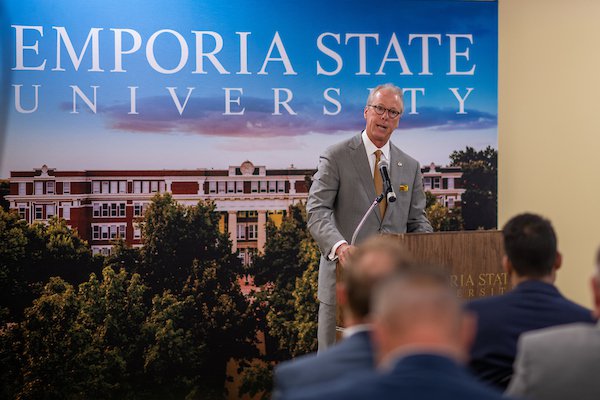 The Kansas Board of Regents (KBOR) met in Emporia today and named Ken Hush president of Emporia State University.

“I am excited that the Regents have named Ken Hush the next president of Emporia State University,” said KBOR Chair Cheryl Harrison-Lee. “As an alumnus, Ken has a passion for Emporia State and the students here, and he has done an outstanding job as interim president. He is a proven leader with a track record of leading large successful teams, leveraging data and making informed decisions to improve organizations.”

The Board named Hush as Interim President of Emporia State on November 17, 2021, following the departure of former president Allison Garrett. He will assume the role of permanent president of the university immediately.

“It has been an honor serving my alma mater as interim president, and I’m excited to continue as permanent president,” said Hush. “Emporia State’s mission is vital to our region and the state of Kansas. I look forward to working with faculty, staff, alumni and our partners in the community to continue serving students and growing our economy.”

Prior to assuming his current role, Hush served as CEO of BLI Rentals, as President and in several executive roles at Koch Minerals and Carbon, and as General Manager and Director at Senior Commodity Company.