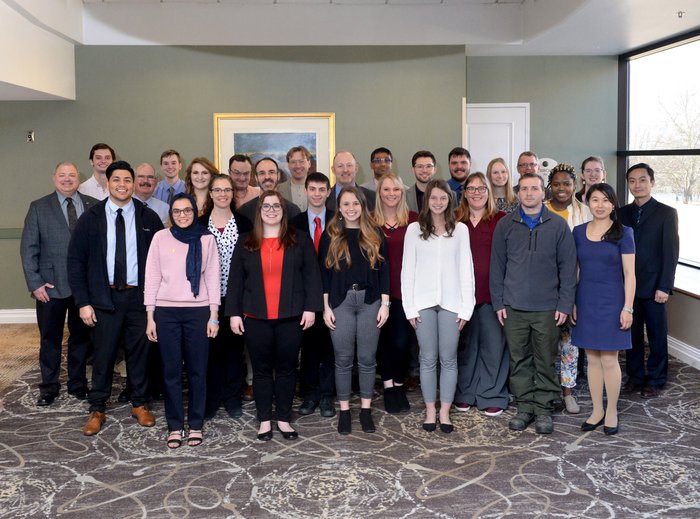 Ed Eilert (BSB 1962, MS 1962) was named an Outstanding Kansas Citian of the Year by The Native Sons and Daughters of Greater Kansas City. Eilert is chair of the Johnson County Board of County Commissioners. The award is designed to recognize individuals who have contributed to the well-being and/or historic preservation of the greater Kansas City metro area, through their professional work, civic engagement or volunteerism, or who have simply become part of Kansas City’s history.

Eleven faculty and 17 undergraduate students attended the 18th Annual K-INBRE Symposium on Jan. 18 and 19 in Wichita. The group presented 11 posters. Senior Derek Reese received honorable mention for his presentation of research conducted with Dr. Eric Trump of Physical Sciences. The Kansas IdEA Network of Biomedical Excellence (K-INBRE) is a NIH-sponsored program that supports biomedical research across the State of Kansas. In its 18th year, K-INBRE has given ESU more than $2 million to improve research infrastructure and provide opportunities for undergraduates to pursue relevant, authentic research alongside a faculty mentor.

Congratulations to Cherie Crisp, majoring in crime and delinquency studies and sociology, who received the 2020 President’s Award from Blue Key Honor Society, which recognizes a current or past Blue Key chapter president who is considered an outstanding collegiate member. The award was given at the national conference, but weather kept ESU students from attending.

Alum Addison Canidy (Communication, gender and ethnic studies minor, 2010) is taking over as pastor of Changing a Generation Full Gospel Baptist Church in Atlanta at the end of July. Addison joined the 4,500-member church when he moved to Atlanta to attend seminary.

Congratulations to Gaile Stephens, associate professor of music, who was asked to present at the Oklahoma Summer Professional Development Academy this summer. The invitation is a follow-up to her 2019 presentation at the Kansas Music Educators Association, “Hip Hop & Kodaly,” with Jeremy Thomas, an inner-city Wichita elementary music teacher.

The Emporia State University Theatre program was well-represented at Festival 52 of the Kennedy Center American College Theatre Festival Region V in Sioux Falls, South Dakota, the week of January 19. At the festival, ESU students competed for acting scholarships and in events for craft and design, participated in workshops, performed in 10-minute plays and with an improv troupe and directed plays.

Congratulations to Juli Piper (BFA Communication 1999), named 2019 District Sales Representative of the Year by Norfolk Iron and Metal. Juli also entered the Circle of Excellence with the company.

Magic card tricks were popular when Dr. Brian Hollenbeck, professor of mathematics at Emporia State University, presented a “Math Magic” show at Emporia Middle School on January 23. Dr. Hollenbeck showed EMS students and teachers various magic card tricks and explained the mathematics principles behind each trick. This event was part of the Inspired by Math and Science program, a STEM enrichment program directed by Dr. Qiang Shi at ESU and Laura Albertson at EMS. The Inspired by Math and Science Invited Speaker Series was funded by the ESU LA&S Dean’s Office.

Congratulations to graduate student Jodi Jensen of Council Grove, who is working as an intern for The Certified Public Accountants of Brungardt Hower Ward Elliott & Pfeifer, L.C., of Hays during the spring 2020 semester. After completing her degree in May, Jodi will work full-time with the firm.

The Emporia Entrepreneur Challenge kicked off with the Meet & Greet on Jan 28. The next event is the Elevator Challenge on Feb 11.

Each year, 20 new students are selected by application for The Dean's Leadership Class. By focusing on the students' abilities and strengths, a high impact learning environment is created using Strength Based Leadership and Kansas Leadership Center principals.

Phi Beta Lambda is raising money for their trip to nationals in Salt Lake City. By busing tables, cleaning, and working for tips, members were able to make $350 at Pizza Ranch. Thank you to those that came to eat and to Rich Avery for allowing such a positive and rewarding fundraising program.

Need your taxes done? Dr. Liz Diers and students are hosting a VITA tax return service once again. Hours for the free service are 10 a.m. to 2 p.m. Saturdays and 2 to 5 p.m. Mondays, both in Cremer Hall on campus. From 1 to 5 p.m. Wednesdays, the service is done at Kansas Works, 215 W. Sixth Ave. This service is not for complicated returns. For more information, call 620-341-5024.

Congratulations to Dr. Melissa Reed (elementary education), who was selected to represent Kansas in a multistate standard setting panel study for Praxis/ETS in Princeton, New Jersey.

Charles Anderson received the Joan Phillips Legacy Award at the American Art Therapy Association’s 50th annual conference, held in Kansas City, Missouri, in November. Anderson worked for ESU’s art therapy department for decades and served as an internship supervisor until 2019. The Joan Phillips Legacy Award is named for another ESU alumni and art therapy instructor. Anderson was included in a profile of black art therapists in the Journal of the American Art Therapy Association.

Current student Caleb Coble, who is due to graduate this year with his degree in Health & Human Performance 2020, was recently accepted into the Wichita State University Physical Therapy program.

Courtney Nemechek, current HPER student, was selected recently as one of SHAPE America’s Majors of the Year.

Brittany Fischer (South Dakota MLS 2019) has accepted the position of Scholarly Communications and Social Sciences Librarian at the Chester Fritz Library at the University of North Dakota.

Emporia State had five provisional qualifiers at the Wendy's Pittsburg State Invitational on Feb. 1 in Pittsburg.

The ESU men’s tennis team is slated for fourth and the women’s team sixth in preseason polls released last week.

Both the Emporia State men's and women's cross country teams earned United States Track & Field/Cross Country Coaches Association All-Academic Team recognition for the 2019 season. To qualify for All-Academic distinction, teams must have a cumulative GPA of 3.0 on a 4.0 scale, including the most recent grading period and compile a team score at their respective regional championship meet, among other qualifiers.

Emporia State's Taysean Goodwin picked up his first MIAA Male Athlete of the Week for this season after scoring a combined 22.5 points for the Hornets at the UCM Invite.

Emporia State's Mollie Mounsey became the third Lady Hornet to earn MIAA Women's Basketball Player of the Week honors this year. The senior from Follett, Texas averaged 20.0 points and 7.5 rebounds per game on .522 shooting in a pair of home games.

During the 18th Annual K-INBRE Symposium in Wichita, these 11 posters were presented:

Fifteen students and five faculty from ESU’s Department of Biological Sciences attended the 13th Annual / 2020 Kansas Natural Resources Conference in Manhattan, on January 30 and 31. ESU students, faculty presented and/or co-authored 10 oral presentations and five posters. When alumni of ESU’s biology program are added to the list of those writing oral presentations, ESU can claim authorship on 21% of the scientific program. Presentations from current students and faculty as well as alumni were:

Patrick Callahan published “The Catholic Church and the College Campus: A Study in Culture” in Adoremus Bulletin, Vol. XXV, No. 5.

“How Does Culture Affect International Business Between the United States and China?”, co-written by Carolina Taylor, accounting student, and Dr. Joyce Zhou, was featured on the American Publishing Services Facebook page.