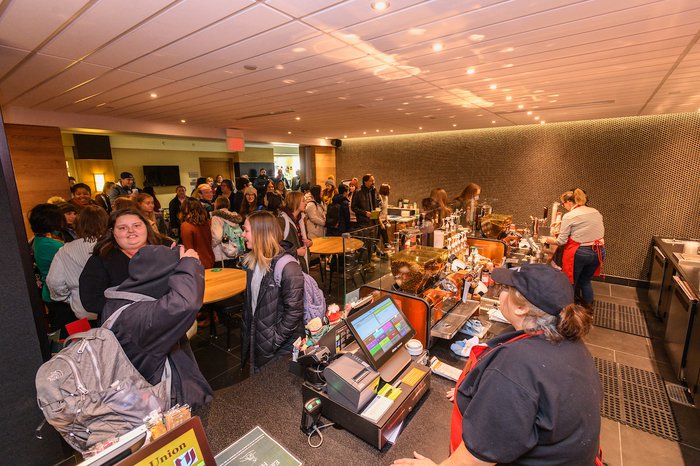 The opening of a fully licensed Starbucks is a welcome addition to the Memorial Union. Since the ribbon cutting at 9 a.m. November 12, a line in the store has been the norm. Funded by Sodexo, which holds ESU’s dining services contract, the store created 18 new student jobs to staff its hours of 6 a.m. to 9 p.m. Monday through Friday.

With Lyon County State Bank and the Department of Homeland Security, Emporia State sponsored a presentation by Geoffrey Jenista, cyber security advisor for homeland security. The community event for business owners and managers was held in ESU’s Cremer Hall, home of the School of Business.

Eleven students from the Department of Mathematics & Economics took a field trip to Kansas City to visit the rare book collection at the Linda Hall Library on November 8. The students viewed rare, old mathematics books including books by Euclid dating back to 1482 and Newton dating back to 1736.

Emporia State University was selected as one of 10 participating institutions in the American Association of State Colleges and University's American Democracy Project Global Civic Literacy Initiative in partnership with World101 from the Council on Foreign Relations. The aim of this initiative is to help students increase their knowledge of our global society and understand how global issues affect their lives. Dr. Mark Daly, Dean of the Office of International Education, and Dr. Bekah Selby, Department of Mathematics & Economics, are ESU’s representatives. Dr. Selby was also recently appointed to the American Democracy Project Steering Committee.

Six students and one professor from the Department of Mathematics and Economics became full members of Kappa Mu Epsilon on October 24th, 2019. One student became an associate member. KME is a mathematics honor society. The organization was founded in 1931 to promote the interest of mathematics among undergraduate students.

Congratulations to alum Jana Liles (BFA Theatre, 2001), who is the new director of marketing for Kansas City Repertory Theatre. A Salina native, Jana will be moving to Kansas City from Chicago.

Congratulations to Dr. Tonya Bauman, School of Business, for winning the Best Presentation Award at the Clute International Academic Conference on Business earlier this month. Her paper was titled, “Qualitative Research: The Repertory Grid Technique.”

ESU alum Eric Hanson from NBC Universal visited campus November 14 and 15. He spoke with students in the Integrated Marketing class about digital media career and internship opportunities at NBC.

Dr. Kat O'Meara (English, Modern Language, and Journalism), Cara Codney (Intensive English Program), Jon Leach (Intensive English Program), and Dr. Cate Crosby (Instructional Design & Technology/Teaching English to Speakers of Other Languages) were recently awarded "Best of MIDTESOL" for their panel presentation, "Cross-Campus Bridges: Reflections on a Multilingual Composition Pilot", which they presented at the MIDTESOL Conference on September 28 in Omaha, Nebraska. They have been invited to present their work at the international TESOL Convention in Denver, Colorado at the beginning of April 2020.

Congratulations to students Kelly Guindon, Aiden Smecka, and Monica Schmidt, who were honored at the Kansas Association for Health, Physical Education, Recreation & Dance 2019 Convention in late October of the as graduate and undergraduate teaching, nonteaching major of the year.

Twenty-eight ESU art therapy graduate and undergrad students, five faculty and adjuncts, more than 20 recent alumni, and countless other alumni from the ESU art therapy program's history, along with over 1,000 others from the U.S. and around the world, attended the 50th Annual Conference of the American Art Therapy Association in Kansas City, October 30-November 3. Between them, program faculty Dr. Gaelynn Wolf Bordonaro and Libby Schmanke provided eight papers, panels, and advanced practice sessions, while the Student Art Therapy Organization was active in conference hosting duties.

Despite a 13-4-3 record and trip to the MIAA Tournament semifinals, the Emporia State women's soccer team came up short of their second straight trip to the NCAA Tournament. The Hornets were ranked seventh in the final regular season regional rankings, but the automatic qualifier from the GAC took the final spot in the regional tournament.

Emporia State linebacker Jace McDown has earned Academic All-District honors as presented by CoSIDA. He is now eligible to move onto the national ballot for a chance to earn Academic All-America honors.

Emporia State's Mackenzie Dimarco was named the Offensive Player of the Year and Freshman of the Year to highlight six Hornets on the All-MIAA women's soccer team. She was joined by Tanna Benefiel on the first-team while Sydney Martens was named third-team with Kailey Corr, Aislinn Hughes and Hannah Woolery earning honorable mention.

The Koch Center for Leadership and Ethics hosted its three-day Fall Undergraduate Colloquium with the topic “Morality and Economics?” Twenty-one students from 10 states traveled to Wichita and discussed the value of incorporating moral and cultural perspectives into economics.

Dr. Evandro Camara of Sociology, Anthropology, Crime and Delinquency Studies presented a research paper on intergroup inequality titled “Notes on Culture and the Natural Attitude” at the 2019 meeting of the Society for Phenomenology and the Human Sciences, in Pittsburgh, Pennsylvania October 30 through November 2.

Students and faculty from ESU’s psychology department participated in the 38th annual meeting of the Association for Psychological and Educational Research in Kansas, hosted by Baker University November 1-2. Presenters included:

Dr. Connie Phelps, Director of Gifted Education, participated as an invited speaker on gifted, talented, and creative education at the Talent Point, Alphabeta, and La Sezione ANILS conferences in Florence, Scorzè, and Rovigo, Italy, during her sabbatical.

Dr. Heather Caswell, Dr. Melissa Reed, and Dr. Roger Caswell presented “Why are we here?: Developing a professional identity through self-care and civil engagement” at the Critical Questions in Education Symposium in Chicago, Illinois on November 11.