According to An Analysis of Instructional Design and Technology Departments, the Emporia State IDT program is one of the top three institutions that won multiple awards within the Association of Educational Communications and Technology (AECT) the oldest and largest academic organization in the field.Our faculty and students have been nationally and internationally recognized.

Awards and Recognitions received by Students and Alumni

Las Vegas, NV – Once again, a team from Emporia State University’s Instructional Design and Technology (IDT) master of science program was chosen as a finalist in the Association for Educational Communications and Technology (AECT) International Design and Development Competition. The IDT team of Julie La Combe and Milton Knopp (L/R photo) presented their instructional design and development solution at the AECT 2016 International Convention in Las Vegas, NV this week. Out of the three finalist teams, they were selected as the overall winning team. 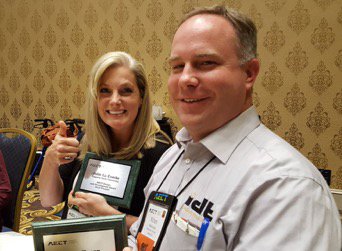 The AECT design and development competition has teams of two students design and develop a detailed written solution and oral report in response to a complex instructional design case study. During the year-long competition, over one dozen international doctoral and master’s degree teams competed in the first round of the competition with 6 teams moving forward to the second round. Three teams were selected as winning finalists and invited to present their solutions at the AECT convention. ESU IDT teams have achieved finalist status 7 out of the last 9 years, starting in 2007. Out of those 7 times, ESU IDT has been awarded the overall win 3 times.

Knopp said, "Even before the finalist presentations, the founder of the competition encouraged us to take a look at the list of finalist and winners since the beginning. Emporia has been well represented in recent years.”

According to Knopp, "The other schools represented in the finals were several times larger than ESU. Julie and I were the only masters students; the other four finalist were doctoral students. We were representing 'the little university that could'... and often has."

As the most recognized association of information concerning a wide range of instructional and educational technology, AECT is the oldest professional home for this field of interest and has continuously maintained a central position in the field, promoting high standards, both in scholarship and in practice. It provides an international forum for the exchange and dissemination of ideas for its members and for target audiences; it is the national and international spokesperson for the improvement of instruction.