"I grew up blue collar, lower-middle class, and college was not an option for me really." 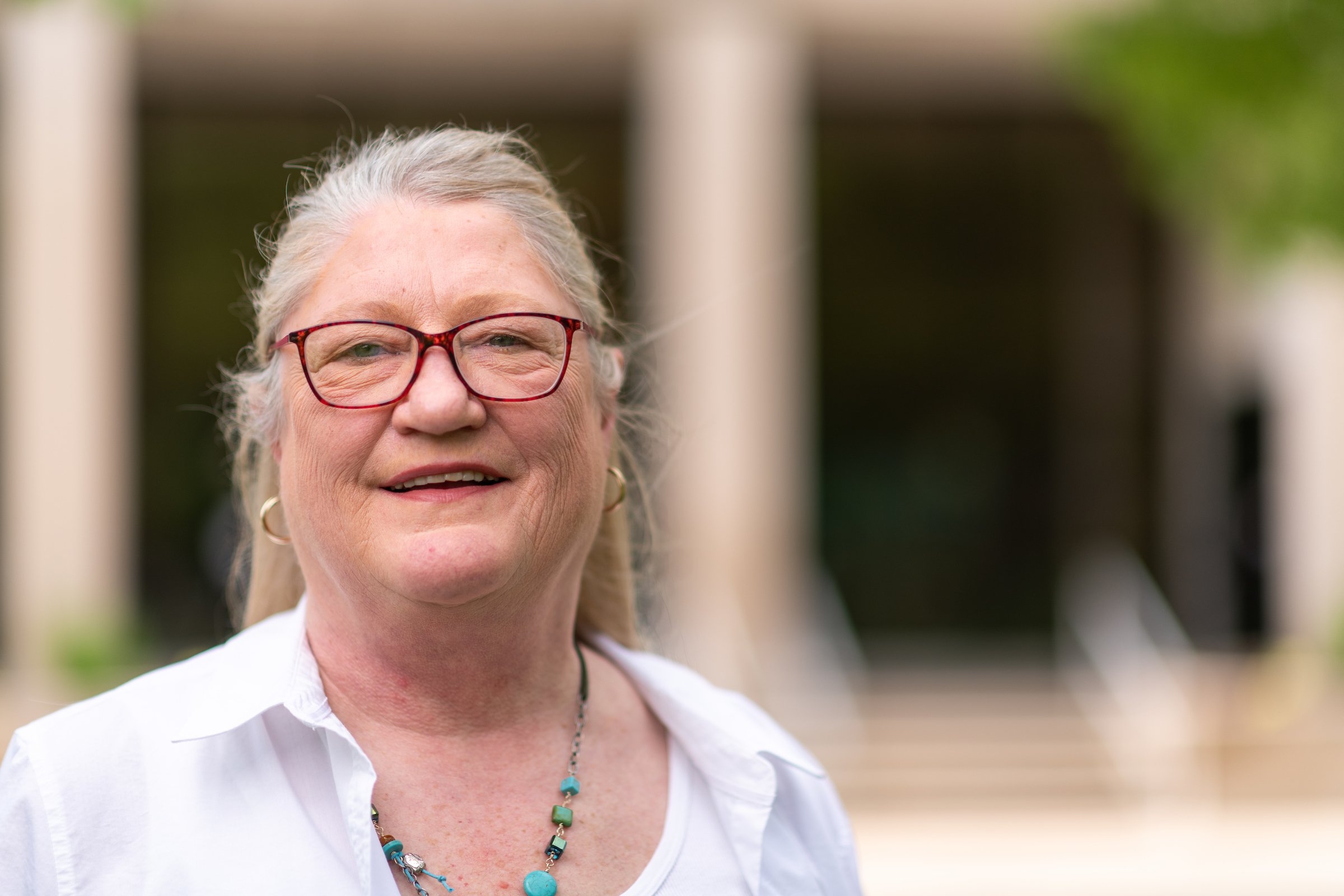 Sandra Valenti worked for a trucking company and Wal-Mart before pursuing college later in life. She now teaches graduate-level courses in the School of Library and Information Management.

Sandra Valenti grew up in Des Moines, Iowa, and, didn’t expect education after high school. In fact, she had basically written it off; no one in her family had gone to college before her, so she expected to take the more traditional steps of life.

“Back in that day, college was not a given. I grew up blue collar, lower-middle class, and college was not an option for me really,” said Valenti. “I graduated high school; my husband and I got married, and I had my first child at the age of 20. I went straight into the workforce.”

Valenti was willing to work and took opportunities when she could.

“The biggest barrier for me was trying to get ahead in the world with only a high school education. I would frequently see people doing jobs that required college degrees and I would think, ‘I could do that,’” she said.

She continued on the path she was on, and developed a pattern of getting promoted. Valenti was in the midst of climbing the corporate ladder at a trucking company when her husband was relocated, leading her to an hourly associate position at Walmart. Yet again, promotions began, and she ended up as the store manager.

Eventually though, Valenti desired life outside of retail.

“I just kind of got burned out. I was transferred to a small town with an older store,” she said. “I remember pricing children’s bathing suits at 1 o’clock in the morning for a tent sale and just thought ‘you know, I need something different,’ so I put in my notice and quit.”

She found a job in the interim, but soon saw an ad in the paper for an opening at the local college bookstore. She applied and got hired. She began meeting people across campus, and one particular faculty member let her in on a secret: she could take college classes there for free as an employee of the college. In fact, this not only applied to Valenti, but to her husband as well.

“At first, I said, ‘Why would I want a college degree?’ He said, ‘Well you might like it,’” explained Valenti, who later found out just how right that faculty member was.

At the age of 42, Valenti and her husband enrolled in a Spanish class, and she stayed in the classroom until she had completed a bachelor’s degree. As she was finishing up, her husband was transferred by his employer to Emporia. She followed him, and ended up finding a part-time job at the Flint Hills Technical College bookstore.

“My friend and I were both interested in the idea of Instructional Design and Technology — it was an up and coming field. We had talked about maybe going to the University of South Dakota, which is where my friend was from. So I said, ‘Well, let’s look into it,’” said Valenti. “I wondered if there was anything closer to home, and lo and behold, we had an IDT program here in Emporia.”

She met with the advisor of the IDT program at Emporia State and within two months, was working as a graduate assistant for the Information Technology department. Valenti worked as an instructional designer for IT while she completed the master’s degree, and continued in the position as she began a doctorate, this time within the School of Library and Information Management.

“A big hurdle for me was that I was not previously a stellar student,” said Valenti. “A major barrier for me was developing study habits … and discipline at each degree stage. I think every time you get a degree, you learn a little more about who you are. It requires a certain amount of thinking and introspection.”

When Valenti was 58 years old, she completed her Ph.D., and a professor position became available within the School of Library and Information Management. She was hired and now teaches and advises many students with a similar path in life to what Valenti had herself. She encourages those students to pursue lifelong education, whether inside the classroom or outside, and to question the world around them. She also encourages both prospective and current students to stop focusing on their limiters.

“For any student, I’d say ignore the numbers. For me it was age. Maybe for you it’s where you think your place to be, or for another person, no one ever encouraged them. Whatever barriers we have, that’s all it is, it’s just a barrier, not a wall. Jump over, go around or blast through.”