"I was plopped into a major because I was undecided and needed to make a choice." 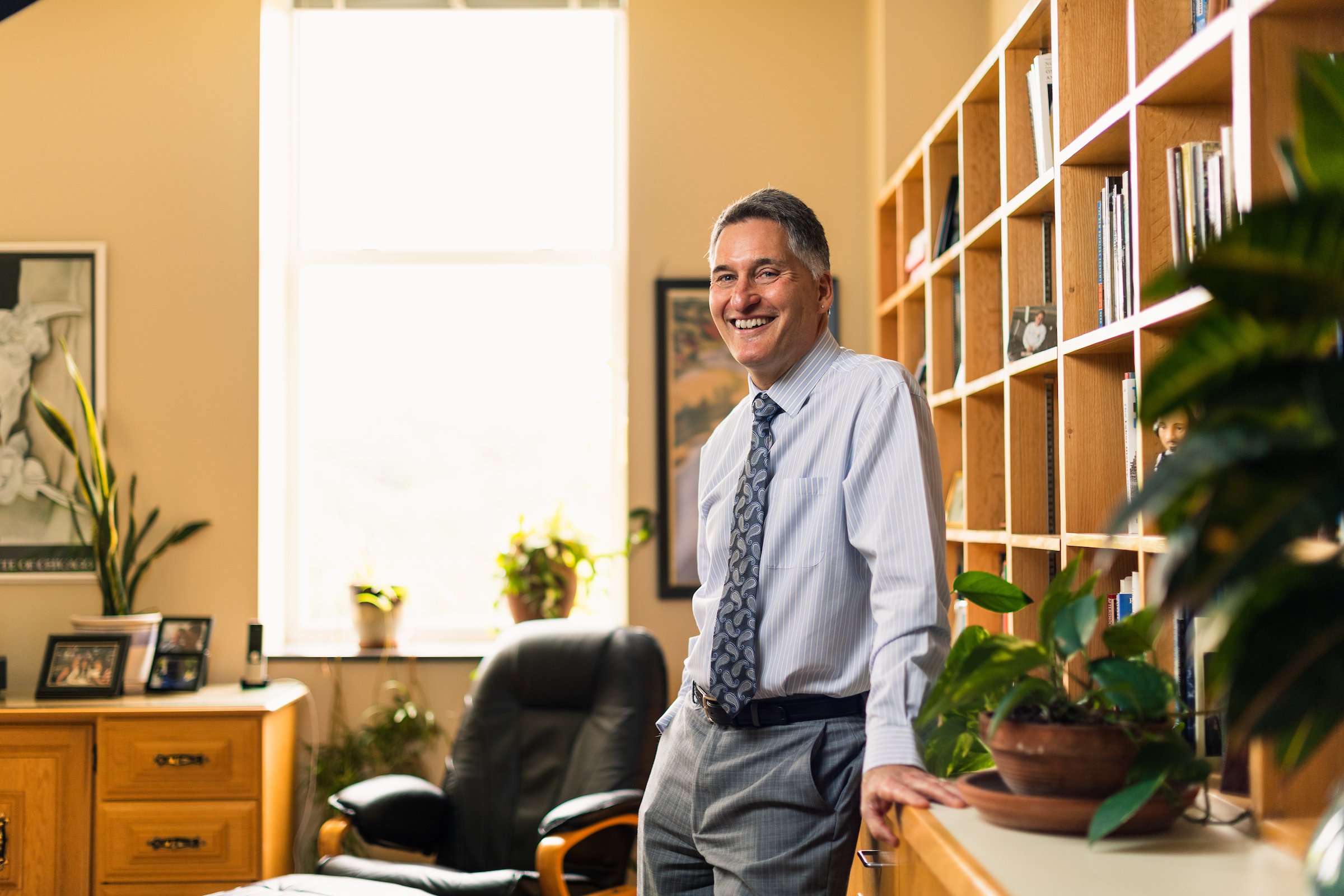 Entering college due to his father's insistence, Jerry Spotswood didn't have big plans. Working as a truckdriver to provide for his family held him over until his interest in English - Shakespeare, more specifically - led him back to school for graduate degrees. He now serves as the Dean of the Graduate School at Emporia State University.

“My plans were to be the next son at Spotswood and Son Precision Machine. After my grandpa died of a sudden heart attack, I wanted to work full-time with my dad, but he would have none of it. He insisted I go to college,” said Jerry Spotswood.

Spotswood, alongside his brother, became the first in the family to pursue a college degree. He began coursework at San Diego State University, but a good friend assured Spotswood that wasn’t the place for him.

Spotswood, now at the University of California - San Diego, had yet to select a major, but the pressure was on to do so.

“I was plopped into a major because I was undecided and needed to make a choice. It is probably telling that I performed much better in all my other classes than I did with my psychology classes. I had brief flirtations with thinking I might do something in counseling, like be a death and dying counselor after my mother was diagnosed with cancer, but by my junior year, I knew that I probably wouldn't be directly using my degree, but I saw completion of the major as the most direct route to graduation,” said Spotswood.

“What kept me going was that UCSD had a track that allowed a lot of work outside the major, so I took some of the most fantastic and interesting classes ever, including a course on American involvement in Vietnam by a professor who had been in Vietnam with the Rand Corporation, a nutrition-focused chemistry class taught by one of the leading trace element experts in the country and a religion class taught by a visiting scholar from Israel.”

Through all of it, Spotswood was working full-time as a truck driver. By his junior year, he was married, adding another responsibility that pulled for his time.

“Generally, if I could get home and in bed by 7 a.m. and could sleep until 12, I was good for some afternoon classes. Then I would try to get in a quick nap before reporting to work at 11 p.m.,” he said. “I was married by my junior year and lived off-campus, so in those terms (working and married) I was unlike the students who lived on campus, went to school full-time and had financial support to carry their studies.”

Spotswood endured on low sleep until he completed his bachelor’s degree in 1985. Following the degree, little of his day-to-day routine changed, aside from the lack of classes within his daily schedule. Soon, though, a few life-altering events took place.

“There was a down time for about two years after graduation from UCSD in which a lot of life-changing events conspired to occur at once: my best friend committed suicide, my first daughter was born and my mother passed away from cancer. Having a full-time job with benefits, I worked and tried to sort through things the rest of the time,” said Spotswood.

Spotswood had little interest in the careers offered by his undergraduate degree in psychology, but thirsted for more academic life. Somewhere along the way, he developed an interest in teaching English at the high school level. After a bit of research, he learned he would need licensure to teach at a secondary institution.

“I stumbled into graduate education after earning a bachelor's degree in psychology and taking two years off,” said Spotswood. “I initially went back to school to get licensure as a high school English teacher, but while doing leveling work in English, some faculty pulled me aside and suggested pursuing graduate education.”

Spotswood enrolled into the English master’s degree and went back to burning the midnight oil.

“Life during the master's degree was similar to life during the bachelor's. I continued to work as a truck driver, working 40 hours a week at nights, but now had two daughters before completion of the degree. The daily routine was predictable. I worked from 11 p.m. to 7 a.m., tried to get home to get some sleep, and generally took evening classes,” he said. “Since my wife worked during the days, I would often pick up the girls from school and/or daycare and prepare dinner for the family before getting my evening nap in about 9 p.m.”

During the last year of his master’s degree, Spotswood was awarded a graduate teaching assistantship that allowed him to assist with teaching courses in the English department. This new position also required office hours — one more thing to fit into his already-packed schedule.

During his master’s work, a few of Spotswood’s faculty took the time to explain to him what a doctorate was, what it could do for him and what it would take to earn one. He applied to programs and was fortunate to land a fellowship in the Renaissance Studies program at the University of Alabama.

“Life during the doctorate was bliss. For the first time in my life I was not working while pursuing an education. I held a fellowship, so I had to teach and hold office hours, but the rest of my time I was able to devote to my studies and my family ... and sleep,” said Spotswood. “My third daughter was born while we were in Alabama while working on the Ph.D., but she barely made a wave in our family routine, since I was generally able to be with the girls after school while my wife worked. After the previous 11 years of working nights and going to school, it seemed I had vast amounts of time that didn't exist before.”

Upon earning his doctorate, Spotswood was properly trained to serve as faculty at a postsecondary institution. He began as a full-time adjunct faculty member at the University of Alabama, and over the next several years, transitioned to positions with greater responsibility at Abraham Baldwin Agricultural College, Eastern New Mexico University, West Texas A&M University and Fort Hays State University.

“At first, the differences seemed negligible. Although I was a fellowship student in Renaissance studies at the University of Alabama and was ‘fashioned’ there as a researcher and was getting interviews at R1s, my first job was at a community college teaching five sections of composition per semester,” said Spotswood. “For a couple of years after graduation, I made less as an assistant professor than I had as a teamster truck-driver. Other benefits, however, were immediately recognizable, like relative autonomy on the job, better working conditions, including the ability to generally determine my working schedule, and the gift of a good night's sleep.”

Spotswood now serves as dean of The Graduate School and Distance Education at Emporia State University. His role as an administrator requires a large portion of his time be dedicated outside the classroom, but he hasn’t given up teaching in its entirety.

“I was able to teach a Shakespeare class a couple of years ago, and I would love to teach a working class literature and film course again. I wish there were more hours in the day, because I truly miss teaching.”