"I made it through with no female role models in mathematics." 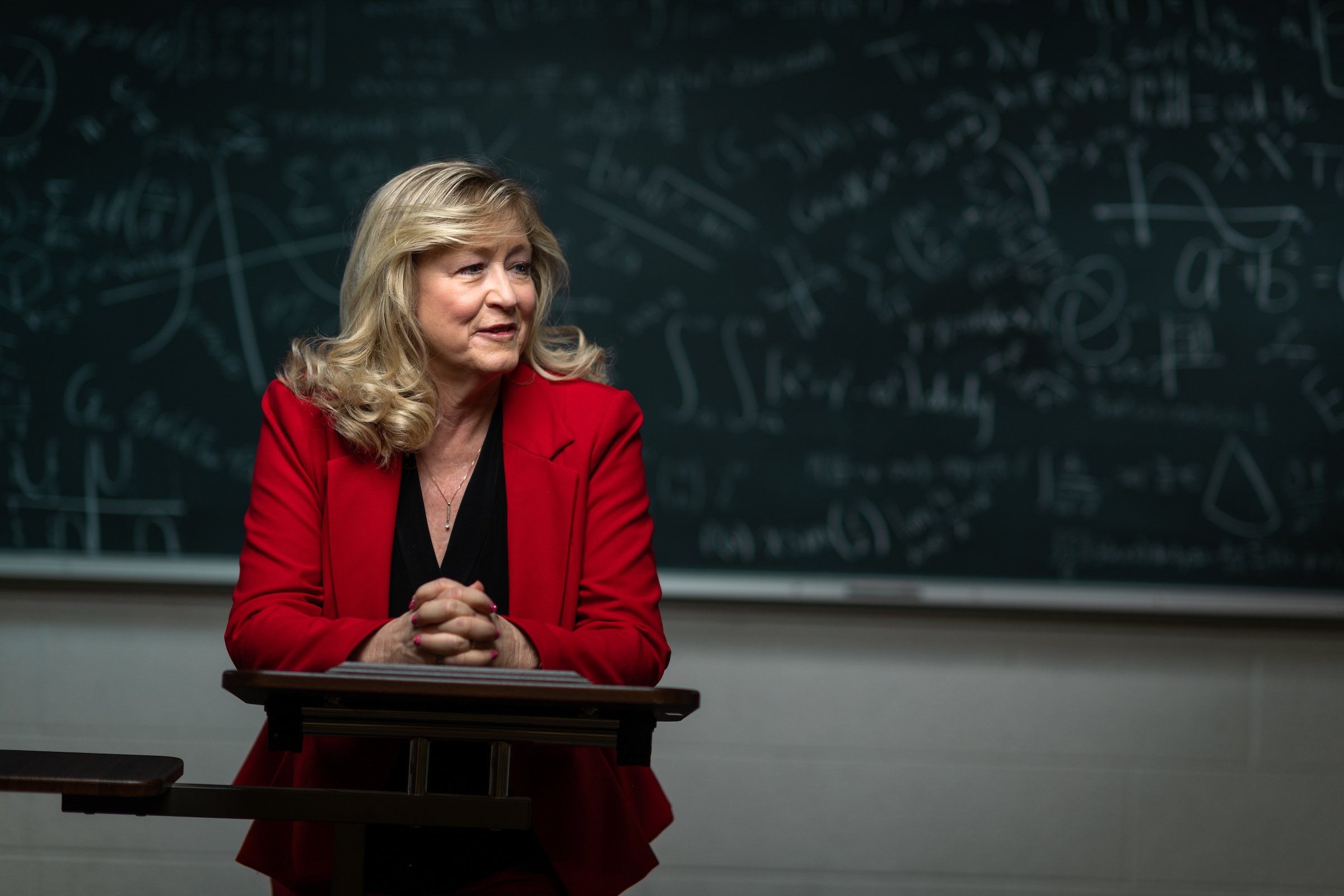 Connie Schrock serves as graduate faculty in the Department of Mathematics at Emporia State University.

Connie Schrock left her undergraduate career at Emporia State University with a Bachelor of Science in Education in Math — a degree that took her a mere three years to complete given her limited funding to continue through a fourth year.

Straight out of college, Schrock went on to teach math at Chase County High School in Cottonwood Falls, Kansas. After years of successful teaching, Schrock decided that a graduate degree may be in her future after all.

“When I graduated, I had decided I was never going back to school. But I found that I really liked mathematics, and I wanted to learn more,” Schrock said.

Schrock decided to return for another degree at ESU, this time a master’s.

“We didn’t have the option of online classes. We either had to come to campus for summer classes or we had to talk the professor into doing an independent study, so I did a couple of independent studies with professors, then I came to campus during the summer, so it was an old-fashioned master’s,” said Schrock.

After seven years of teaching in the high school, working on a master’s and teaching as an adjunct with two colleges, Schrock decided it was time to take the next step and apply for a doctoral program.

“When I left the high school, I was teaching six different classes, six credit hours for Butler Community College, and I had been hired by Emporia State business department to teach Introduction to Computers for them,” she said. “In addition, I was programming for a couple of businesses on the weekends. I was truly a workaholic, and I decided that I could do a Ph.D. because it couldn’t be worse than all of the other things I was doing.”

Initially, Schrock’s options were geographically limitless. She could apply anywhere. Soon, though, that changed.

“When I was looking into graduate programs, we found out my mother had terminal cancer. So I wanted to apply close to Wichita — that’s where she lived — because I knew it was going to be rough,” Schrock explained. “So I finished teaching out the year and was accepted with a scholarship to K-State. I was also offered a graduate teaching assistantship.”

This may seem like a fairly normal path, and one that was not unique to Schrock. Given the time period, however, it was not yet common for women to pursue a graduate degree, nonetheless one in mathematics, a historically male-driven field.

“At this point I had never, ever had a female math teacher — not since the fifth grade. So I went to K-State and I was the only female graduate student that had a teaching assistantship at that time,” she said.

Although she felt encouraged by professors who pointed out her abilities and even allowed her to be one of the first graduate teaching assistants to run a large lecture class, she still struggled with being the only woman.

“There were men that thought they could talk down to me, that thought because I was a woman I might not know as much as they did. And there were times that maybe I didn’t, but I wasn’t willing to admit that.”

Not only was she a woman, but she was a single woman at that.

“The other thing that was interesting is I went to school with men who were married. One of the men told me that I was alone, so when things went wrong in my professional coursework or my dissertation or whatever, I felt it more because I didn’t have anybody at home to take me away from being in that world.”

Schrock persevered and as she progressed through her doctoral degree, she successfully completed a second master’s. From there, she finalized her Ph.D., and in 1988, received a unique phone call.

“I got a phone call from my former professor here at Emporia State, and HE??? said ‘Hey, we have a mathematics education position — would you apply?’ I got advice from several different people, but I kept weighing between graduate salary and introductory faculty salary, and it was a fairly simple choice, so I applied,” she said.

That application proved fruitful, and Schrock accepted the position. Yet again, she found herself to be an outlier.

“I came to ESU, and at the time, I was the only woman in the Mathematics and Physical Sciences Department. That was really strange because any time any issue came up that affected women, within this huge group, they would look at me and I would have to speak for all of womankind,” she said. “Instead of just speaking for myself, I was supposed to represent my entire gender. And it was weird because I had made it this far without any real role models in mathematics.”

Not only was the path to a graduate degree a bit different for her, but the classroom setting was different, too.

“It’s hard to be a woman in academia, because sometimes you still run across men who question your worth. Students tend to press women sometimes harder than they do men,” she said.

Ultimately, though, Schrock found opportunity at the end of her graduate schooling and, even with the hardship, found it to be a refining experience. Schrock now speaks at conferences on a national scale, and was the first person to hold every elected office within NCSM: Leadership in Mathematics Education, a national mathematics organization. She was also the first college faculty member to serve as the president of the organization. These opportunities helped her grow professionally and create a nationwide network of mathematics education peers. Through it all, Schrock maintains that taking those steps and pursuing her passions were worth it.

“Anything worth doing is worth putting the time and effort into it to do it well. I think that’s one of the things I’ve noticed,” Schrock said. ”When I was nervous about going to a bigger school, to a higher level, someone said to me that the cream rises to the top and if you can be successful in one place, then you can be successful in another, because it’s more about drive than just natural talent.”